MADISON, Jan. 8, 2020 — ABC of Wisconsin has launched a new micro-series that will take a behind-the-scenes look at careers in construction. The series is called Money Jobs, hosted by Jobs Ambassador Rebecca Kleefisch. The former state lieutenant governor joined ABC of Wisconsin back in November to emphasize careers in the skilled construction trades.

In the first episode of Money Jobs, Rebecca shares a wonderful story about a young woman who not only found a career that she loves, but one that provides the kind of income that will allow her to buy her mom a home. Find the first episode here.

Rebecca served as lieutenant governor of Wisconsin from 2011-2019, where she championed workforce and economic development. She is well known for her efforts fighting poverty and focusing on prison re-entry reform, among many other endeavors. 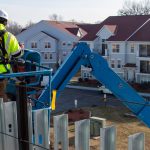