[Madison, Wisc…] More than 40 state representatives and senators have been selected to receive the Associated Builders and Contractors of Wisconsin’s “Building Wisconsin” award because of their dedication to free enterprise, open competition and the merit shop construction industry during the 2015-16 legislative session.

These legislators fought for ABC of Wisconsin members on multiple occasions during the last session, leading to numerous legislative victories. Their support of merit shop contractors is key to growing the construction industry and creating more jobs in the state. From policies that repealed burdensome regulations on small businesses to legislation that will bolster Wisconsin’s economy, each legislator played an integral role in making Wisconsin more competitive.

“It gives me great pride to recognize these 42 policymakers for their unwavering support of merit shop contractors,” said John Mielke, ABC of Wisconsin President. “The construction industry and Wisconsin’s economy will continue to move forward because of their efforts.”

During the past session, ABC of Wisconsin supported legislative proposals including a sales tax exemption pass-through that made it easier for contractors to purchase materials for non-profit clients; a streamlined process for commercial plan review; legislation making Wisconsin the 25th right-to-work state in the country; and significant reforms to the state’s prevailing wage law.

“From all of us at ABC of Wisconsin, I congratulate each legislator on their ‘Building Wisconsin’ award,” Mielke added. 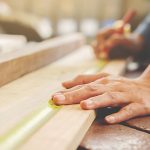