On inauguration day, Jan. 20, 2021, Joe Biden became the 46th President of the United States. While many questions will remain about the changes to come under the new administration, one thing will be clear: the 46th President is very likely to pursue a decidedly different agenda than the 45th President, Donald Trump, did in his four years in the oval office.

Whether President Biden will achieve his slogan of “Build[ing] Back Better,” however, will be determined by the policies his administration pursues and ultimately delivers upon. The chances of those policies succeeding, at least for the first two years, have been significantly boosted by the outcome of two Senate runoff elections in Georgia on Jan. 5, 2021 that delivered a Democratic Senate majority.

Democrats now have a slim majority control of both chambers of the 117th Congress after retaining control of the U.S. House of Representatives, initially winning the lower chamber in 2018. As President Biden prepares for his first day in office, Vice-president Kamala Harris will assume the role of president of the evenly divided, 50-50 Senate and will be able to cast tie-breaking votes, giving Democrats control of the upper chamber.

Although Democrats maintained functional control of the House of Representatives, the Republicans’ unexpected gain of seats is seen as a critical victory for the GOP and a blow to Democrats, who had hoped to pad their majority and instead now face infighting among the progressive and moderate wings of the party. In all, the Democratic House majority will begin the 117th Congress with nine more member of the House than Republicans – the smallest majority since 1944, assuming Republicans hold the net 12 seats gained in 2020. With an even slimmer governing majority to be actually seated in Washington due to several executive branch appointments from the House Democrats’ ranks, a progressive House agenda will face significant challenges in the new year.

With the 2022 midterm elections already on the horizon, Democrats will face an emboldened Republican effort to take back the majority lost in 2018. And if past is prologue, Republicans will be favored to do just that, as the party occupying the White House typically loses seats in the midterms – a trend that will likely be spurred on now that the Senate will be controlled by Democrats. Since the end of World War II, the party holding the presidency has lost an average of 27 House seats in midterm elections and, more recently, 63 flipped in 2010 and 41 seats in 2018. Republicans will be facing a much more manageable delta in 2022, as they will need to net roughly a dozen seats to gain a majority.

On balance, the results of all of the elections held this cycle, while headlined by a Democratic trifecta at the federal level, show a strong message of continued division of the electorate and, therefore, a likely balance of power between both parties. Despite the now federal trifecta, Democrats’ victory was won with a relatively hollow legislative mandate, given the underperformance by Democrats down ballot in November. For example, following President Barack Obama’s 2008 win at the presidential level, Democrats had a U.S. Senate majority of 58 – 41 (one vacancy) and a House majority of 256 – 178.

With historically thin margins, the Democrats’ legislative and regulatory priorities – such as further COVID-19 relief, the Protecting the Right to Organize Act, efforts to make tax-related changes, and an investment in America’s crumbling infrastructure – will remain a challenge to achieve, with the partisan battle lines, highlighted below, already drawn.

This package providse the industry’s small businesses with much-needed aid, as throughout the existence of the PPP, the construction industry received roughly 12% of loans, totaling more than $65 million in relief – the third highest of any sector. Notably missing, however, are liability protections for businesses operating through the pandemic.

As the economy continues to recover in some areas, the construction industry’s backlog continues to shrink, as many new projects have been significantly affected by the pandemic. With most states considering construction to be essential, however, the industry is ready to help lead the way to preserve jobs thanks in part to the significant pre-existing backlog.

As Biden has promised to pursue various workplace safety issues related to COVID-19, such as establishing an OSHA temporary emergency standard for COVID-19, his agencies will likely reverse many of President Trump’s deregulatory accomplishments.

Biden’s “Strengthening Worker Organizing, Collective Bargaining and Unions” agenda is filled with anti-free enterprise that have been opposed by workers, small businesses, and large firms in the merit shop construction industry. Biden’s labor law agenda is centered around achieving the policy goals of the big-labor-lauded Protecting the Right to Organize (PRO) Act. This legislation, which passed the Democratic-controlled House in 2020, would strip away workers’ free choice in union elections by instituting backdoor card check, codify an Obama-era joint-employer standard, limit independent contractors’ rights by codifying California’s “ABC” test, eliminate right-to-work protections across the country, and roll back many other products of the Trump administration’s Department of Labor.

A Democratic-controlled Senate is poised to attempt to advance the PRO Act that was previously blocked by their Republican counterparts in the 116th Congress. Should the legislation ultimately be passed in Congress, the legislative filibuster would likely have to be removed in the U.S. Senate, which would require significant political capital to achieve.

The Biden administration’s stance on labor policy is also expected to significantly depart from their predecessors. How different of an approach though, will hinge on the leanings of Biden’s Secretary of Labor nominee Boston Mayor Marty Walsh, who spent decades as a union member and leader, most recently as head of Boston’s Building and Construction Trades Council. Walsh’s hand will guide many of the merit shop construction industry-relevant rules and regulations while he serves in the Frances Perkins building.

As is the case with several other issues, the likelihood that the Biden Administration would be able to make significant tax-related changes greatly hinges on the possible repeal of the legislative filibuster, as a 50 vote Republican Senate minority is not inclined to support the proposed tax increases. If the agenda listed below is to pass into law, Democrats could also resort to the budget reconciliation process to get a tax increase of any kind over the finish line, as was the case for the Republican tax cuts in 2017.

Among many more minor proposed changes to the tax code, President 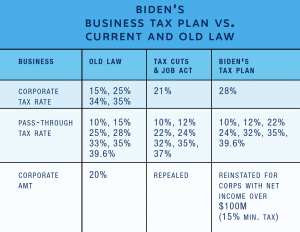 Biden is expected to attempt the following tax changes:

• Return to a top individual tax rate of 39.6% at the $400,000 bracket threshold compared to the highest current rate of 37% established starting in 2018 under the Tax Cuts and Jobs Act.

• Increase the C-Corporation income tax rate to 28% from a flat 21% under the Tax Cuts and Jobs Act, which reduced the Obama-era rates from a graduated high of 35%.

• For corporations with at least $100 million in annual income, impose a new 15% alternative minimum tax on reported book income (versus the income reported on corporate tax returns).

Should the plan be signed into law, although it is unlikely all together, contractors will have to decide, with their financial advisers, how they will factor in the effects of the plan into their strategy.

The one item of political consensus in an era of partisanship is that an infrastructure investment is needed—and has been for some time. The American Society of Civil Engineers gives the existing United States infrastructure a D+ grade, which is the same mark it received in 2013, while also noting the need to spend $4.5 trillion by 2025 in order to improve the state of the country’s roads, bridges, dams, airports, schools, etc. However, delivering on a substantial infrastructure investment has proved to be elusive for Washington lawmakers. With user-generated revenue streams taking historic losses, in addition to state and municipal budgets facing unprecedented demands, Congress has decided, at least for now, to punt on the issue. However, as was the case for President Trump, the incoming Biden Administration will seek to pass a long-term transformational infrastructure package.

The success of Biden’s $2 trillion “Build Back Better” infrastructure plan, which seeks to pair COVID-19 economic stimulus with an infrastructure investment to include investments in schools, water systems, transit, universal broadband and 5G, will depend on the political will of the administration and Congress. As we learned in 2017 when, President Trump and then-Speaker of the House Paul Ryan decided to prioritize much-needed tax reform, any hope for an infrastructure initiative died as the ensuing battle faded into election year-politics.

However, with COVID-19 relief still needed at the state and local level, a “shot clock” set on a one-year extension of highway funding to expire in September, and an expectedly eager Department of Transportation and Labor, infrastructure advocates remain cautiously optimistic. The details of Biden’s plan are still yet to be seen; however, Congressional Democrats showed their hand when they passed an infrastructure plan dubbed H.R. 2, the Moving Forward Act, that would have spent more than $1.5 trillion on surface transportation, airport, school, housing, healthcare, energy, water and broadband infrastructure. However, the bill excluded many critical priorities for the construction industry while implementing numerous anti-merit shop provisions, such as government-mandated project labor agreements, inflationary Davis-Bacon prevailing wage requirements, and the Obama-era contractor blacklisting rule.

Touted as one of one of the Biden administration’s priority issues, passing a comprehensive infrastructure package will have a short window for a bipartisan infrastructure compromise. However, with the emergence of a Democratic controlled Senate, the appetite for direct federal spending will remain in vouge. Biden’s pick to lead his infrastructure efforts, former South Bend mayor and presidential candidate, Pete Buttigieg, will likely face an uphill battle in unfamiliar waters in Washington. Buttigieg beat out other high-profile potential picks for the DOT post, including the Building Trades Unions preferred choice, former DOT Deputy Secretary John Porcari.

While it is unclear exactly where Butigieg stands on merit shop contractor priorities that are germane to an infrastructure investment like Project Labor Agreements, ABC expects theBiden administration to expand PLA requirements. The President has stated his support for the Obama executive order that mandates PLAs (that was not rescinded under President Trump like it was in the past Republican Administrations) on federal and federally-assisted projects, excluding nonunion bidders from the process. 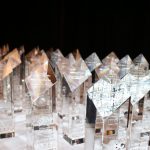 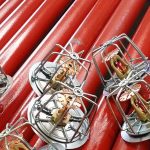