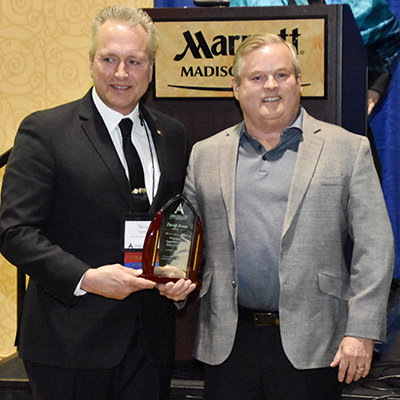 Terry Hayden, left, president of the Wisconsin Pipe Trades Association, presents the Department of Workforce Development's Hall of Fame award to Dave Jones in recognition of Jones' contributions to apprenticeship.

Dave completed a five-year plumbing apprenticeship in 1977 through his employer, Mt. Horeb Ace Hardware. After his apprenticeship, Dave started Dave Jones Plumbing out of his garage in 1977. Since that time, Dave directly trained numerous apprentices, with his first plumbing apprentices being Chris Booth, Chris Johnson, Brandon Engen, Tom Darrow and Billy Meudt. Chris Booth now owns his own plumbing company and Chris Johnson and Billy Meudt both played a huge part in the apprenticeship program for many years. Brandon Engen went on to become a master plumber in 1999; he is currently the vice president of Service and Remodel for Dave Jones, Inc. and just celebrated 25 years with the company.

Dave also had the pleasure of overseeing the apprenticeship of his son, Greg Jones. Greg started as an apprentice in 1999, worked his way to become a journeyman and currently holds his master plumbing license. Greg, like many others, went on to train his own apprentices and took over as president and CEO of Dave Jones, Inc. after his father’s retirement in 2015.
Since the company founding in 1977, Dave was involved in training over 200 apprentices and played a significant role in making Dave Jones, Inc. one of the largest single apprenticeship trainer companies in the Madison area. Currently, Dave Jones, Inc. offers apprenticeships in plumbing, HVAC, fire protection and, most recently, electrical.
apprenticeship Hall Of Fame Wisconsin Department Of Workforce Development
Dave Jones Receives Hall of Fame Award From Wisconsin DWD2019-03-112019-11-06https://www.abcwi.org/wp-content/uploads/2019/11/abcwi_logo_shop.pngAssociated Builders and Contractors | ABC of WIhttps://cdn.abcwi.org/wp-content/uploads/2019/03/20210454/header_hall-of-fame-award.jpg200px200px
Recommended Posts
Search
Recent Posts
Categories
Membership 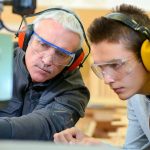 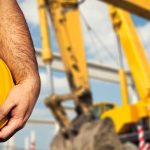