Critics of the state’s prevailing wage law say it artificially inflates the cost of public works projects for the benefit of union workers.

When supporters of Wisconsin’s prevailing wage law recently began running a television ad saturated with racial politics, it elicited a groundswell of bipartisan pearl-clutching. The ad claims that if the prevailing wage were repealed the state would be flooded with illegal immigrants, leading RightWisconsin.com’s Collin Roth to deem the spot “sleazy,” “ugly,” “cynical” and “false.” Meanwhile, Brendan Fischer of the lefty Center for Media and Democracy compared the ad to the inevitable result of a bull eating a hearty meal.

But by playing on racial fears, the pro-prevailing wage crowd was simply dusting off an 84-year old playbook.

Before passage of the Davis-Bacon federal prevailing wage law in 1931, a local contractor in New York Rep. Robert L. Bacon’s district lost a hospital building contract to an Alabama firm. The Alabama contractor brought with him a team of black laborers from the south, housing them in barracks in Bacon’s district.

The prevailing wage law soon proposed by Davis-Bacon, however, would have virtually eliminated such “Negro labor” from being utilized. The bill gave preference to local, union firms — at the time, “nonunion” labor was another way of saying “minority,” as black and other minority construction workers were overwhelmingly employed by nonunion minority contractors. These contractors would be virtually shut out of the bidding process for federal building programs.

This was all fine with the labor movement. In the Senate, American Federation of Labor President William Green testified in support of the law, claiming “colored labor is being brought in to demoralize wage rates.” The president of the New York branch of the International Brotherhood of Electrical Workers also testified in favor of the bill, telling the House of Representatives that black workers were “an undesirable element of people.”

Within three weeks of Congress passing Davis-Bacon, Wisconsin had its own version of the bill drafted. It was the height of Depression panic, when government’s central planners sought desperately to micromanage the economy. And the prevailing wage bill was a Keynesian buffet, artificially inflating the cost of public works for the benefit of union workers.

In under three months, the Wisconsin Legislature passed the bill with little fanfare. The day after Gov. Philip La Follette signed prevailing wage into law, the Milwaukee Journal mentioned 14 of the 22 bills La Follette had signed; prevailing wage wasn’t even among the bills the paper deemed noteworthy.

This “fast tracked” bill would go on to swell the cost of public works projects for nearly a century while steering those dollars to a politically favored union constituency. Recently, the Wisconsin Taxpayers Alliance estimated that Wisconsin paid between $200 million and $300 million more for public projects, as prevailing wage and benefit rates are as much as 45% higher than the market rate.

In fact, prevailing wage hasn’t achieved the law’s stated purpose of keeping bidding for projects local. Take Milwaukee’s most infamous public works project of the past 30 years, the “deep tunnel” sewer system: The Metropolitan Milwaukee Sewer District could only identify five Milwaukee-area firms working on the project out of the 14 contractors that won bids.

Prevailing wage is a shining example of how government can be used as a cudgel against groups that fall out of political favor. In 1931, this was black and Mexican labor. Today, it is non-uniononunion. Madison’s mayor has even announced plans to deny city contracts to groups that make political contributions to conservative causes.

It even can be argued that prevailing wage foments gender wage discrimination. Contractor positions traditionally held by women, such as secretarial and clerical jobs, don’t benefit from wage floors — and yet men who work for the same employer in construction-related jobs are granted the guaranteed wage support.

Several Republican state representatives are trying to break the cycle and force through a bill repealing the law. Gov. Scott Walker largely has been silent on the issue. Most likely, a provision weakening the prevailing wage law will be inserted into the state budget, leaving the soul of the indefensible law in place.

Given labor’s most recent television ads, if prevailing wage survives, it will be a vindication of the century-old style of race-baiting that gave birth to the law in the first place. When we think about whether government should have the authority to pick its winners, we should also reflect on its past motives in picking its losers.

By Christian Schneider of the Journal Sentinel. 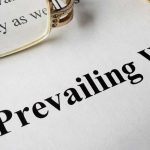