The gas station isn’t the only place consumers are feeling inflation’s bite – they’re feeling it when they open their electric bills, too.

According to the U.S. Energy Information Association, retail electricity prices climbed faster in 2021 than in any year since 2008. The average per-kilowatt price in 2021 was $0.1372, up 4.3% from 2020 and the highest ever recorded by the association.

Homeowners can cut costs by using solar energy, which allows them to avoid paying their utility’s variable per-kilowatt hour charge for some of their energy. But installation costs put rooftop solar panels beyond the reach of many homeowners. That’s why companies offer financing for solar panel installation in 30 states. Wisconsin isn’t among those states.

According to 2019 survey conducted by the North Carolina Clean Energy Technology Center, Wisconsin is one of 15 states yet to clarify the legal status of solar financing arrangements. Under a solar financing agreement, commonly called a power purchasing agreement (PPA), a company installs solar panels on a homeowner’s roof and then applies to the local utility to connect the panels to the utility’s grid. The company owns the panels and sells the homeowner the energy generated by the panels at an agreed-upon amount – either a fixed monthly amount or the amount of the energy the homeowner uses each month. The typical PPA has a term of between 20 and 25 years.

The status of solar financing arrangements remains unclear in Wisconsin because of a legal stalemate between Eagle Point Solar, an Iowa company, and Wisconsin Electric Power Company (also known as WeEnergies), one of Wisconsin’s 12 public investor-owned utilities.

In 2019, the City of Milwaukee hired Eagle Point to install 1.1 megawatts of solar panels on the roofs of seven municipal buildings. The city estimated that the solar panels would save it $28,000 a year in energy costs. Under the terms of the $1.9 million deal between the city and Eagle Point, ownership of the solar panels would be split 80/20 between the company and the city, with the city retaining the option to purchase the company’s ownership interest over time. Eagle Point would receive the 30% solar installation federal tax credit, which would reduce the city’s cost. But when Eagle Point applied to WeEnergies to connect the panels to the WeEnergies grid in July 2019, the utility declined. WeEnergies noted that by selling power generated by the panels to the city, Eagle Point was acting as a public utility in WeEnergies’ exclusive territory, which is prohibited under state law.

Like many states, Wisconsin established a “regulatory compact” with public utilities by enacting legislation in the early 20th century. Under the compact, the state grants a public utility the exclusive right to provide power to customers in a given geographical area. In exchange, the utility agrees to provide service to any customer in the area who applies for it and to charge rates set by the state’s three-member Public Service Commission (PSC).

“You don’t have competition, on the theory that these are such capital-intensive and facility-intensive enterprises that you don’t want multiple entities trying to serve the same area,” said Brad Jackson, a partner at Quarles & Brady LLP who represents WeEnergies.

Whether Eagle Point is acting as a utility by installing and owning the solar panels on the roofs of the municipal buildings in Milwaukee depends on how one interprets Wis. Stat. section 196.01(5)(a). That section defines a “public utility” as an entity that “may own, operate, manage or control … all or any part of a plant or equipment, within the state, for the production, transmission, delivery or furnishing of heat, light, water or power either directly or indirectly to or for the public.”

After WeEnergies denied Eagle Point’s application to connect the Milwaukee solar panels, the company appealed the denial to ​the PSC. Eagle Point also asked the PSC to rule that its agreement with the city did not make it a public utility under section 196.01(5)(a). The company argued that it was not acting as a public utility because it was providing power only to the City of Milwaukee, not the public. The PSC agreed to review WeEnergies’ denial of the connection application but declined to determine whether Eagle Point’s agreement with the city made it a public utility.

In May 2019, Eagle Point sued WeEnergies and the PSC in Dane County Circuit Court and asked the court to declare that its agreement with the city didn’t make it a public utility. The court dismissed the lawsuit in November 2019, ruling that Eagle Point had failed to exhaust its administrative remedies – a ruling upheld by the Wisconsin Court of Appeals in July 2021.

In January 2022, the PSC deadlocked on a 1-1 vote on the question of whether WeEnergies’ denial was lawful. Commissioner Ellen Nowak, appointed by then-Republican Governor Scott Walker, agreed with WeEnergies that under the agreement with the City of Milwaukee, Eagle Point would be operating as a public utility. Commissioner Rebecca Valcq, appointed by the current governor, Democrat Gov. Tony Evers, said that WeEnergies had no basis for denying Eagle Point’s connection request. The other Evers ap​pointee, Commissioner Tyler Huebner, recused himself, citing the PSC’s recusal policy and his involvement with the case prior to his appointment to the PSC.

Eagle Point Solar is not the first company to ask the PSC to determine that a PPA didn’t make it a public utility. Sunrun, a California company, asked the PSC to do the same thing in 2018. In February 2019, the PSC voted 2-1 not to take up Sunrun’s request, with the two members appointed by Gov. Walker in the majority and the member appointed by Gov. Evers in the minority. One of the Walker-appointed commissioners, Michael Huebsch, said the laws regulating public utilities were not “keeping up.” Huebsch, a former legislator, said it was up to the legislature to change those laws. Bills that would have authorized PPAs in Wisconsin were introduced in both of the last two legislative sessions; none received a hearing.

Third-party Solar in Other States

In 2014, the Iowa Supreme Court ruled that Eagle Point’s PPA with the City of Dubuque did not render it a public utility. The court based its holding on a multi-factor analysis: the agreement was an individually negotiated, arms-length transaction; Eagle Point would provide a customized service to a single customer; providing on-site solar energy is not an indispensable service that demanded public regulation; there was no evidence that Eagle Point was a monopoly. The court acknowledged that the spread of PPAs could reduce the demand for electricity provided by public utilities. But there was nothing in the record that quantified that threat or assessed the likelihood of its occurring, the court noted. Additionally, nothing in the record suggested that public utilities had been harmed by PPAs in states where solar providers were not considered public utilities. The court also pointed out that Eagle Point sought only to reduce demand for electricity supplied by a public utility, not replace the utility.

The single, directly on-point Wisconsin Supreme Court case interpreting the statute governing what constitutes a public utility is more than 100 years old. In Cawker v. Meyer, 147 Wis. 320, 133 N.W. 157 (1911), the supreme court considered whether a company that built a plant to provide power to tenants of a building it owned was operating as a public utility. The plant provided more power than the company’s tenants needed, so the company sold the excess power to three adjoining neighbors.

The supreme court held that the company was not acting as a public utility. The court concluded that in enacting the statute defining a public utility, the legislature sought to regulate the provision of power to the public – “whoever might want the same” – rather than to a few tenants or neighbors. The applicability of Cawker to the dispute between Eagle Point and WeEnergies is complicated by both the case’s vintage and the narrowness of its ruling.

“While we find it quite easy to ascertain the true spirit and intent of the law, yet we deem it inexpedient and unsafe to attempt to define in more specific terms than the statute what does and what does not constitute a public utility,” wrote Justice Aad Vinje for the supreme court in Cawker.

Among those circumstances is the effect that widespread adoption of PPAs across Wisconsin would have on the state’s public utilities. In setting the rate that a public utility may charge, Jackson said the PSC calculates the utility’s fixed costs – including the cost of maintaining the power grid and related equipment, like the meters mounted to houses – in addition to the utility’s variable costs and a reasonable rate of return on the utility’s capital investment (minus depreciation). Jackson said that if customers buy less power from a public utility because they’re being served by a third party, it would upset the balance of cost allocation inherent in the rate allocation because the customers wouldn’t be paying the full fixed cost required to serve them.

“The rates are set such that the utility is recovering a fair amount of its fixed cost through the variable per-kilowatt rate,” Jackson said.

“So, to the extent the customer is either self-serving or buying power from somebody else, the utility is not recovering part of its fixed costs and that’s a problem until it gets its rates fixed, and then that becomes a problem for the utility’s remaining customers, who have to make up the difference.”​​​

The non-refundable federal tax credit for solar installations, which is now 26%, makes it more affordable for customers to pay up-front for installing solar panels.

But that’s not an option for non-profits and municipalities or individual taxpayers without enough income to offset the credit against, said John Clancy, a shareholder at Godfrey &​ Kahn S.C. who focuses on utility law.

“There’s a list of folks for whom financing is more important because they can’t get the tax credit,” Clancy said.

Renewable energy advocates argue that allowing utilities to decline connections to PPA-financed solar panels is putting a lid on the solar energy industry in Wisconsin, which according to the Environmental Law and Policy Center ranks 41st among states in solar generating capacity.

Future of Solar in Wisconsin?

How is the PPA issue likely to be resolved in Wisconsin? Legislative action appears unlikely, given that bills to legalize PPAs died without getting a hearing in the last two session. Jackson said the PPA issue is one that cuts across party lines, making it hard to predict the shape and substance of any bill that might pass.

“Even if the legislature did something, I’m not sure what the outcome would be,” Jackson said. “I’m really not.”

Jackson thinks it’s more likely that the Wisconsin Supreme Court will answer the question, by ruling on an appeal from a PSC decision. The Midwest Renewable Energy Association has handed the PSC a chance to make such a decision.

On May 26, the association filed a petition with the PSC asking the commission to declare that third-party financed distributed energy resources are not public utilities as defined by section 196.01(5)(a). 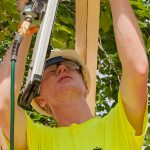 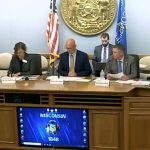